For the last few days, I've noticed a spike in views for one of the wallets in my shop.  The analytics seemed to be indicating that the views were coming from Etsy Fashion (an admin curated gift guide of sorts) but each time I checked out the page, I didn't see any of my stuff.  Today, I looked again, and voila(!), there was my World Map Billfold Wallet, front and center in a feature for Father's Day fashion gifts.  It turns out, every time the Etsy Fashion page loads, it will give you a slightly different group of products... I just hadn't clicked enough times for my wallet to rotate through.  I grabbed a screenshot for some sort of proof (mostly to myself) that I'm perhaps finally holding my own amongst the millions on Etsy (even if it's only for 5 minutes of fame).  It certainly made my rainy Saturday... 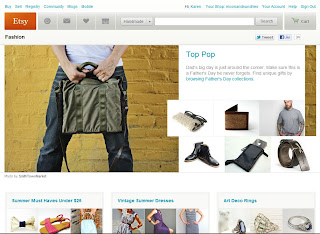 In other news... stART On The Street: Spring Edition was supposed to be taking place tomorrow (Sunday, June 3rd) but has been switched to the rain date next weekend.  If you live in the central Massachusetts area, please join me and 150 other talented regional artisans next Sunday, June 10th for a day of sunny fun!  Plus there's live music, a classic car show, and some super tasty food vendors (with lots of veggie/vegan options!).  My inventory is chock-full of colorful and delightful surprises.  You don't want to miss this awesome event!

And I promise, I will return with tales from last summer.  So soon...

Return of the Living Dead

Oh dear...  Hard to imagine that over a year has passed since my last blog posting.  But it has, and I think it's about time to resurrect this wee little public journal.  Last night, I logged in to the dashboard for this site and learned that not only does it get visited daily, it's been averaging between 5 to 25 unique hits a day (now I realize that 25 hits a day is not ground-breaking traffic... but I think until now, I've assumed that the rest of the world was ignoring this site as much as me... turns out, that's not quite the case).  So for the next couple of weeks, I'll be slowly but surely breathing life back into this page.

I guess the best place to start would be with a tale or two about the adventures which lead to me irresponsibly ignoring some aspects of my life (like this blog, for example).  In the next few posts, I'll revisit my experience at the Penland School of Crafts, share stories about my spontaneous solo road trip across the country, and tell you how I ended up singing on one of my favorite musicians' new albums.  2011 was a doozy of a year and I do believe 2012 has just as many crazy escapades up it's sleeve.  Stay tuned... 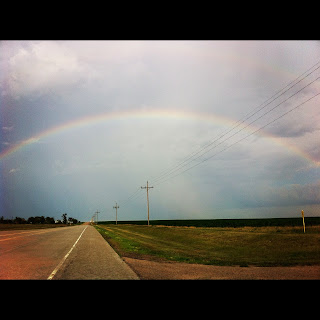 Email ThisBlogThis!Share to TwitterShare to FacebookShare to Pinterest
Labels: a rainbow in Kansas, more to come, return of the living dead, spontaneous road trip, tales of 2011 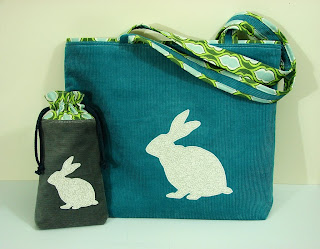 A little over a month ago, I was contacted by a very sweet gal in Tokyo named Yoko who was interested in having me make her a custom Rabbit Tote. Her avatar, a photo of a cute, fuzzy, gray bunny hanging out of a shoulder bag, indicated that my rabbit totes were a perfect match for her. I had sold one in my Etsy shop about a week earlier and she was curious if I could make her another. I agreed and got to work taking pictures of fabric in my personal stash and searching Etsy to help her find a print that would be just right for the liner. We exchanged quite a few emails in the following days. She was looking for a specific size so she would be able to carry her sketchbook with her and she also wanted a matching drawstring pouch for her colored pencils.

After settling on fabrics and sizes, I got to sewing. I was just about finished when I decided to double-check the measurements. Somehow, I had a brain-fart when I was doing my math and I had made the bag just a tad too small. 'Shouldn't be a problem', I thought, 'I'll just make another', but that's when I realized that I didn't have enough fabric left... oops. I spent the next few hours scouring the internet for more of the tile patterned cotton to no avail. With my tail between my legs, I emailed Tokyo to let Yoko know what had happened.

Luckily for me, she was very understanding of the situation. We spent the next few days emailing some more so I could assist her in picking out a new liner fabric. Eventually, she found some more fabric she loved in another Etsy shop. I ordered a few yards and waited for it's arrival to start the sewing again.

Dozens of emails and weeks later, I finally finished the custom Rabbit Tote and drawstring pouch. I packed it up and dropped it off at the post office on the evening of March 10th. Several hours later, Japan was struck with one of the largest earthquakes in recorded history, which was followed by a devastating tsunami in the north.

When I awoke on the morning of the 11th and heard the news, I immediately went to my computer to email Yoko. This tragedy suddenly felt much closer to home despite the fact that it happened on the other side of the world in a country I've never been to. I wasn't sure what I wanted to say, but I felt desperate to know if Yoko was okay. To my surprise, she replied within a few hours.

She said that she was safe and unharmed. She had been at work when the earthquake hit and was stuck there until late in the evening because of power outages and the trains being shut down. She indicated that her apartment was a mess but that all of her friends, family, and pet rabbits were okay. It was a short email but all I needed to hear. I was struck by the notion that her rabbits made her short list of safe loved ones.

I don't have any pets currently, but have had many over the years. From dogs to horses, goats to goldfish, and birds to even bunnies... I think we've had one of everything at some point or another. As I began to process the magnitude of what was happening in Japan, I started thinking about how 4-legged furry friends can really provide therapeutic comfort and companionship in trying times. I thought about Yoko and her obvious love for her rabbits. The timing of my path crossing with Yoko's felt serendipitous. It inspired me to get involved. 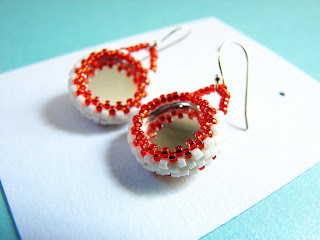 You can help me raise money for World Vets and their efforts to rescue animals in Japan by purchasing one of my 'Rising Sun Buttons' or a pair of my red and white Reflection Drop Earrings. I will be donating 100% of the profits from each sale. World Vets operates in a number of countries around the world to provide veterinary services in times of need and in under-serviced regions. You can learn more about them here: http://www.worldvets.org/. 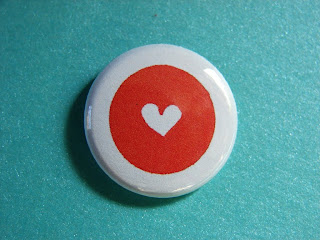 I hope you'll consider rocking one of my buttons. You'd be supporting handmade (high five!) and a stellar organization (double high five!). I'm also happy to create a custom listing with as many buttons as you'd like (you can reach me through email [moonandsundries-at-gmail-dot-com] or Etsy Convo). Spread the love with your friends and family ~♥~
Posted by Karen at 8:49 AM 2 comments: